An old(ish) Kentucky home gets a new chance

The Lexington Herald Leader put it correctly when they stated that "For the architecture world, there is a collective sigh of relief that one of the most iconic residences in the world, which has had a tumultuous decade, could be safe for now," after the Miller House in Lexington, Kentucky was sold at auction to a buyer who has expressed interest in preserving the home and possibly finding ways to share it with the public. From the brink of demolition to a new purpose in life

Perhaps not be the best news for preservationist purists, but good news for adaptive reuse advocates, the once-threatened Brutalist Coral Gables Police and Fire Station will be repurposed as a the Mercedes-Benz of Coral Gables' new dealership’s new showroom and office. The Docomomo US 2021 National Symposium, “Chicago: Crossroads of Modern America,” will feature a joint keynote address by Mabel O. Wilson and Jack Pyburn that considers how race and the African American experience have been impacted by the Modern Movement and looks at the origins of how history is determined to be significant or valuable, that may in turn lead us to reconsider what we preserve.

A Postwar Vision for a Modern Milwaukee

In the years immediately following World War II, there was a concerted effort in Milwaukee to construct new arts, sports, and cultural facilities.  These projects were promoted by city and county politicians, business leaders, and civic groups as amenities to serve local residents and showpieces to elevate Milwaukee’s status as a major city.  All played a role in cultivating Milwaukee’s identity, and some even made a significant contribution to the city’s architectural heritage.  The three buildings discussed below continue to serve in their original capacities and are some of the city’s most visible symbols of the Modern Movement. The curator of the “American System-Built Homes” on West Burnham Street in Milwaukee examines Frank Lloyd Wright’s blend of proportion, materials, social reform, and nature in these seminal homes that mark Wright’s earliest gesture of modern architecture to a broad audience. Concepts developed and tested on The Burnham Block infuse Wright’s thinking for the rest of his life and continue to shape modern architecture to this day. The Mitchell Park Horticultural Conservatory, known as the "Domes," was designed in 1959 and constructed over the next eight years. Architect Donald L. Grieb's proposal for the cone-shaped domes was selected following a national competition. Its patented design has never been replicated, making the Domes unique in the world. This essay examines three built works by Wisconsin’s First Black Registered Architect, Alonzo Robinson. Under-recognized for his distinct modern contributions to Milwaukee’s landscape, this piece takes a closer look at significant works from Robinson’s portfolio that represent his dedicated service to this city, his faith, and his community.

Milwaukee Moderns will introduce the diverse communities, progressive ideas and cultural leaders in Milwaukee during the twentieth century. This preview chronologically examines five iconic modern Milwaukee buildings through the lens of the pioneering architects, designers, activists, and community leaders that pushed for design reform and advocated for architectural innovation.

Docomomo US is pleased to announce our first three scholarship recipients for the 2021 National Symposium Chicago. These scholarships were made possible thanks to members who donated specifically to our Scholarship fund. Spring Real Estate Round Up 2021

The real estate market is a little crazy right now, so we are hoping that these amazing modern (and some Postmodern) homes are all able to find owners who will appreciate them as much as we do. Following the limitations caused by the COVID-19 pandemic that closed libraries, bookstores, schools, universities and learning spaces all overs the world, Docomomo International endeavored to transform its signature publication, the Docomomo Journal into an open source format, making its contents available to all readers.

Trenton, NJ's Brutalist buildings being torn down for surface parking

Trenton, New Jersey’s Brutalist Health and Agriculture buildings are being demolished as we speak, making way for the urban blight of surface parking. In 2016, then Governor Chris Christie announced a major state office construction plan that would replace three buildings, including two built for the combined use of the state’s health and agriculture departments. Local civic activists came together as Stakeholders Allied for the Core of Trenton, calling for a redesign of the new building plan, in the manner of 21st century development. Bookshop.org is an online bookstore with a mission to financially support local, independent bookstores. Docomomo US has set up a storefront where you can purchase recommended readings for our Mission for Modernism events, seasonal book lists, and annual themes. We know you get a lot of emails. In keeping with the modern belief that less is more, Docomomo US has always aimed for quality over quantity. Please complete this short survey to help us gage how we’re doing and to continue providing communications that are relevant to you. A cultural crime at the McGraw Hill building

In a shocking and frustrating turn of events, news broke this week that the beautiful and iconic Art Deco lobby of the McGraw Hill building has been completely gutted. The Landmarks Preservation Commission is reviewing proposed changes to the Rockefeller Wing addition of the Metropolitan Museum of Art, designed by architect Kevin Roche. 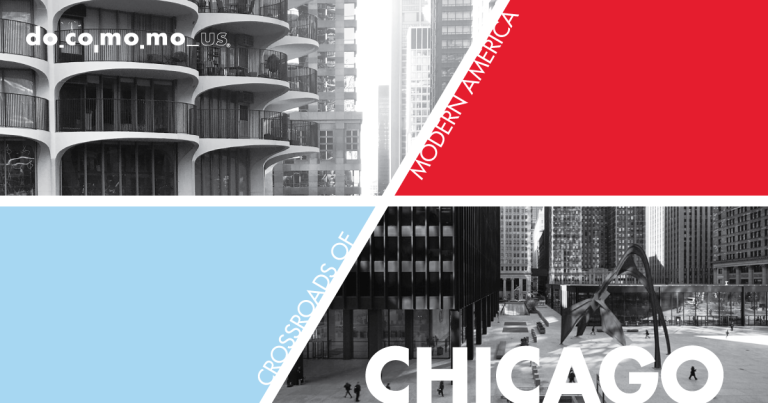 The Docomomo US/NOCA Symposium Grant provides financial support for students and emerging professionals committed to the documentation and conservation of Modern Movement buildings, landscapes, and sites. The intent of this year’s scholarship is to enable up to three individuals to participate in the Docomomo US 2021 National Symposium.